This assay assesses whether test articles cause an increase in contractile force in electrically stimulated human ventricular trabeculae, with isoprenaline as a reference compound. Additional analyses can be undertaken to report on the rate of both contraction (dF/dt) and rate of relaxation (–dF/dt).

Ventricular muscle functions to control the flow of blood into and out of the ventricles. The ventricles are responsible for pumping blood either to the lungs or to the rest of the body in the systemic circulation. Any alterations to ventricular contractility can affect cardiac output as well as the workload on the heart. 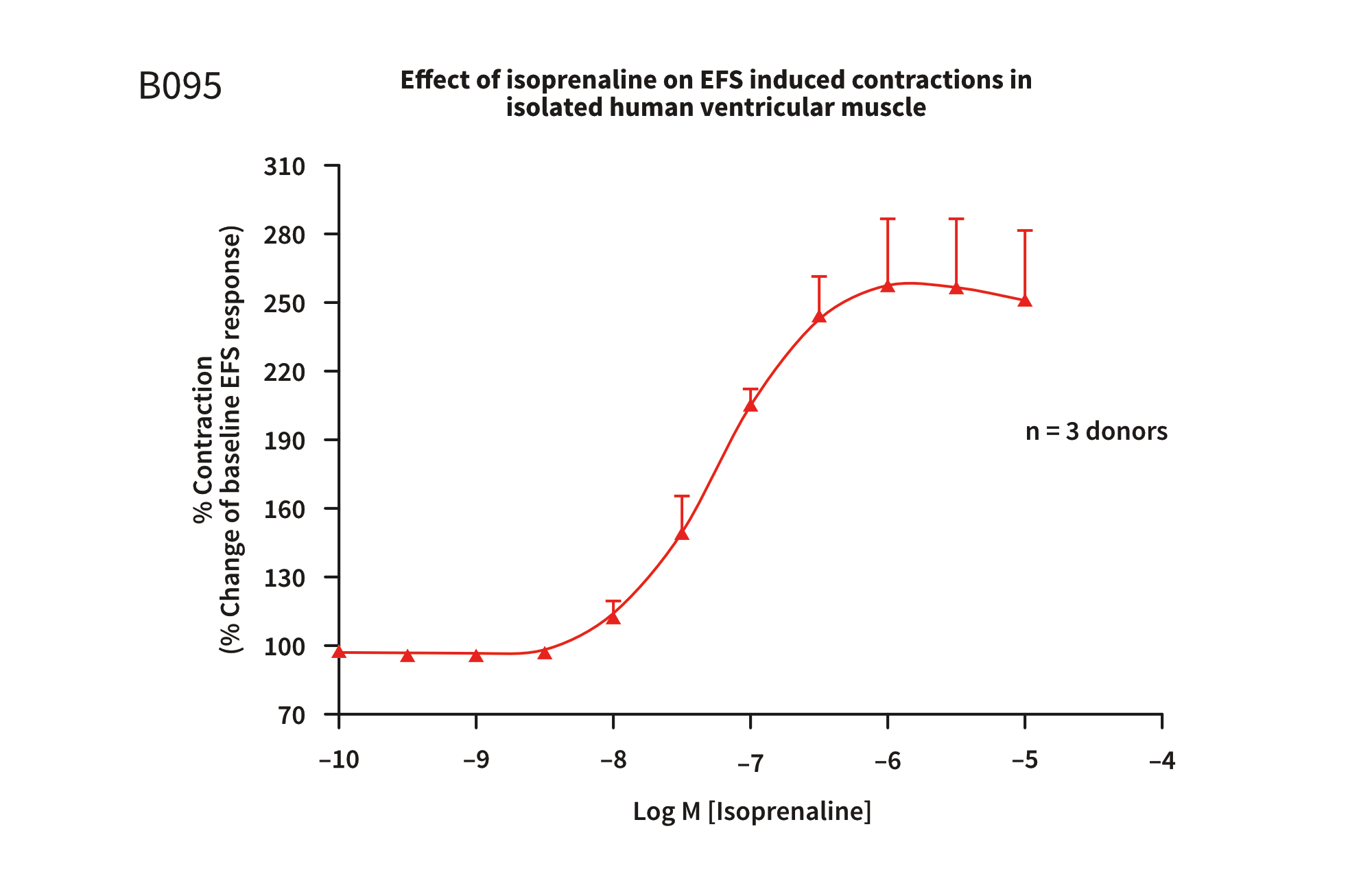 The specific results that will be provided are the effects of increasing concentrations of test articles on the contractile state of isolated human ventricular trabeculae muscle.

Test article(s) to be provided by the Sponsor in storable aliquots at required test concentrations with information on diluent vehicle used. Stock solutions are prepared in distilled water unless otherwise requested. Bath volumes are 25mL; sponsor to provide sufficient test article to run the entire study.

This assay assesses whether test articles cause an increase in contractile force in electrically stimulated human ventricular trabeculae, with isoprenaline as a reference compound. Additional analyses can be undertaken to report on the rate of both contraction (dF/dt) and rate of relaxation (–dF/dt).

All individual muscle preparations are initially processed through standardisation and qualification procedures to ensure functionality, prior to starting the study protocol.

Muscle preparations are processed through a standardisation procedure to reduce signal variability prior to electrical field stimulation and pharmacological intervention. This ensures that muscle preparations are maintained under appropriate physiological tension throughout the experiments.

Following standardisation, muscle preparations are subjected to an electrical field stimulation (EFS) voltage curve. This process determines the optimal EFS settings to be utilised during the study protocol.

Test tissues are then washed, and the EFS responses allowed to settle to steady baseline levels.

Muscle preparations which pass the standardisation and qualification pass/fail criteria will then progress to the study protocol.

To assess their ability to modulate EFS mediated cardiac contractility, 6 point cumulative concentration response curves (CCRC’s) will be performed for each test article. These CCRC’s will be performed upon a steady baseline EFS response. A positive control compound and representative test article vehicle CCRC will also be run to allow direct comparison with test articles.

An example of the conditions assessed for 3 test articles are detailed below (each condition will be run in duplicate muscle preparations):

Responses shall be expressed as % change from baseline EFS response. Statistical analysis (where appropriate) will be performed using GraphPad Prism, with the results being shown in graphical form in the final report.